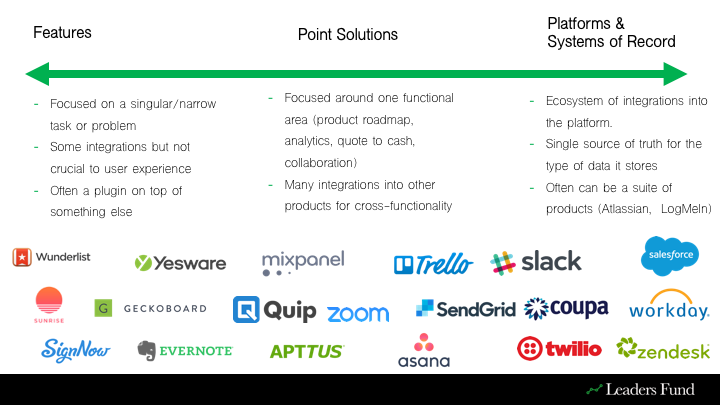 Every day an entrepreneur is challenged with a near impossible balancing act:

These questions, at their core, are investment decisions that in summation have a direct impact on the outcome that a company can achieve. In order to make sound investment decisions in a business, entrepreneurs need to put their VC hat on and go through the same calculus an investor does to understand realistically where is the business today, and given the product breadth and market size what value can the company ultimately reach? Understanding this point will help CEO’s produce a winning outcome for all stakeholders involved.

Feature vs System of Record

This exercise is no easy task, because enterprise software companies are living, breathing organisms that are constantly evolving. They exist on a spectrum of stages, ranging from ‘features’ all the way to ‘platforms’ or ‘systems of record’. Each of these stages of company evolution have associated ceilings of value, and evolving from one stage to the next can only be done through decisive deliberate actions made by the company. Understanding where on this spectrum one exists and aspires to exist, is a crucial first step to be able to operate effectively towards a desired goal.

Features often have an upper bound on their potential value, whereas systems of record companies can be very valuable and become the most lucrative investments for operators and investors. Most companies start out as features or tools and only over the course of time through new product launches, acquisitions, or product iterations do they evolve into larger opportunities, and increase the upper bound of value the company can achieve.

It is a fallacy that the path to success for all software companies involves raising venture capital. It is not a financing vehicle that is right for every company, and Features companies that do not aspire to evolve into a larger solution should think hard about whether venture capital is the right strategy. If it is, taking on too much dilution on the path to achieving its ultimate goals will result in a poor outcome for everyone involved because there is an upper bound on the value those companies can achieve.

Conversely, system of record companies tend to support far more capital being deployed into those opportunities effectively. Those companies might taking a longer term view on dilution, hiring, product and many more operational decisions. Heavy dilution in the long run will not be as impactful because the size of the pie to share at the end will increase greatly.

The most dangerous thing a company can do is miscalculate where on the spectrum it exists and what it can realistically achieve on its current course. Time and time again companies that believe themselves to be platforms and subsequently raise ‘platform’ money at ‘platform’ valuations, ramp up their burn without solid data to support a potential jump to the next stage of value creation. These companies risk boxing themselves out of the market by throwing off the balance of valuation vs potential outcome, in effect making the risk/return calculation a hard one to justify for future investors.

As mentioned above, enterprise software companies are constantly changing, which means that a company that is a feature today could eventually become a point solution or a platform in the future in a variety of ways. Certain events and milestones in a company’s life, like the successful introduction of a new product, hiring incredible talent, or moving horizontally into new verticals, can radically change the ceiling of value that a company can achieve, and there is no one path or equation to get there.

Salesforce is a great example of a company that has continuously taken steps to increase its potential value. Although the company would still have been a runaway success if it had solely focused on its initial market of CRM, it likely would not have become the $50bn behemoth it is today focused on this alone. Instead, it undertook a series of actions that consistently enlarged the potential impact the company could have. It became acquisitive to pursue new verticals like marketing, retail and productivity, launched new products and marketplaces that created network effects and lock-in, and hired incredible people who wrote the playbook on how to run an enterprise sales organization. By constantly challenging itself to grow and find new opportunities, it systematically increased the potential value that the company could achieve. It started as a system of record for customer relationships, and evolved to own multiple systems of related to a company’s customer facing activities.

Although Fab.com is not a SaaS company, it serves as a useful example of a company that miscalculated the value it is creating. After reorienting the company from a social network to an ecommerce company, it caught the attention of many VC’s. Fab went on to raise an enormous amount of money at what now seems like nonsensical valuations, and ultimately was not able to improve the economics of its business such that it could change the upper bound of its value arc. Furthermore, by miscalculating this up front and basing its operating strategy accordingly, it effectively priced itself out of the market for any follow on investors to come to its rescue.

A final example of a company that recognized what it was and executed the appropriate playbook is Trello. Atlasssian recently acquired the company for $425M, and while there is a lot of shaming going on for companies that don’t reach ‘unicorn’ status, this transaction was likely a great outcome for everyone involved.

Trello is a project management tool that allows teams to collaborate and work together effectively, and found its power users within the product and developer community. It is uncommon that a project management software company either crosses the $1bn valuation mark or goes public solely focused on project management alone. In order to increase the upper bound of values of the company, point solution companies like this must either expand the scope of what they do, or integrate so well with other systems that they effectively become a system of record.

Trello raised $10.5M over 6 years, and given their rumored traction, likely could have raised far more. This capital raising strategy was likely the product of deliberate and methodical planning and execution and not a signal of the market’s appetite. If the company had pursued a different strategy of raising tens of millions of dollars at high valuations to chase growth at all costs, it may have ultimately evolved into a larger product and opportunity, but in doing so could have priced itself out of the eventual acquisition value that Atlassian offered. By raising a small amount of capital relative to the mindshare and brand value the company had built, it maintained optionality and was the master of their own destiny at the point that it mattered. The company could have decided to keep going, and although it ultimately didn’t, it at least had the choice.

There are many companies particularly in the last 4 years that have taken advantage of the frothiness in venture funding markets and raised too much money at values that don’t align within the market opportunity they are pursuing or the stage of progress of that company. Some of these perfectly priced companies will be successful, but others will run into trouble as their optionality diminishes, and they are forced to make decisions from a position of desperation instead of power.

This isn’t as big of a problem for investors, because they are diversified amongst a portfolio of companies who are all taking risk. It is more of a prescient issue for entrepreneurs though, because all of their eggs are in one basket and raising money at high values and setting expectations that are unrealistic to achieve is a surefire way to lose control of a company.
For this reason, The best entrepreneurs share many common traits with the best investors. They understand this tradeoff and framework for decision making. They understand that there are no shortcuts or silver bullets to building a valuable company, and they must align their business strategy with their ambitions and achievable potential value for their company in order to build a company of consequence, and throw a win on the board for everyone involved.