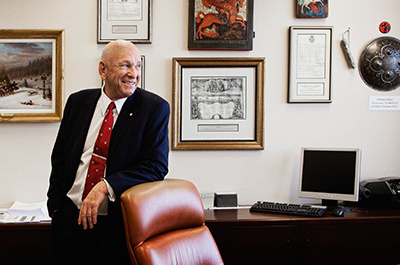 It is an honour to be working with one of the greatest investors Canada has known.

Globe and Mail has the story here: Link

Seymour Schulich, one of Canada’s wealthiest mining entrepreneurs, is making a big bet that he can strike gold in a different sector: high tech.

Mr. Schulich has committed more than $50-million to a venture capital fund launched by a new Canadian-U.S. venture capital firm, Leaders Fund. The firm is being co-led by his son-in-law, David Stein, an accomplished tech entrepreneur whose two previous firms, Workbrain and Rypple, sold to U.S. companies. The VC firm announced last month it had closed the $100-million fund but made no mention in its release of the Schulich connection.

Mr. Stein wouldn’t disclose how much his father-in-law had committed to the fund but said his investment is “foundational” and that there are other investors.

In an e-mailed statement, the 76-year-old Mr. Schulich said investing in the technology sector is “a logical extension for us” after a decade of providing scholarships to students in science, technology, engineering and math through his charitable foundation. “As an investor in the Leaders Fund, we are able to deploy capital into a sector that is increasingly driving our economy, and which must be successful in order for Canada to be successful,” he said. “Equally important, there are now a growing number of experienced and capable technology entrepreneurs in Canada who can tap [the fund] for capital and experience … and set themselves up to be the industry leaders of the future.”

Mr. Schulich is the latest in a line of successful “old economy” Canadian entrepreneurs who have branched out of their core businesses to provide venture capital financing to the tech sector. Toronto’s Diamond family, heirs to the Cadillac Fairview fortune, founded Whitecap Venture Partners two decades ago, while three other real estate development firms, Vancouver’s Beedie Development Group, as well as Toronto’s Mantella Corp. and Plazacorp have backed tech startups through their venture capital arms.

Mr. Stein is as big a name in the Canadian tech space as his father-in-law is in mining and philanthropy. The 42-year-old South African-born computer scientist co-founded Workbrain in 2000 with David Ossip and led sales and marketing efforts, steering the firm past the collapse of the dot-com bubble to become a successful enterprise software provider with more than 500 employees and $100-million in revenue.

“David was a leader,” said Daniel Debow, a childhood friend who worked for Mr. Stein at Workbrain. “He was our key closer and coached everyone on how to do visionary, strategic sales.” Workbrain went public on the Toronto Stock Exchange and was acquired in 2007 by New York software firm Infor Global Solutions for $227-million (U.S.).

Workbrain’s lasting impact on the Canadian tech scene was considerable: many alumni have either started or hold senior positions at a slew of other startups, including Hubba and Hootsuite.

Mr. Stein followed that successful exit by co-founding another enterprise software firm with Mr. Debow, Rypple. They sold the company to Silicon Valley giant Salesforce.com<http://salesforce.com>, Inc. for $51-million. Mr. Stein stayed on as a senior executive at Salesforce but said, “I knew that if I wanted to continue to have an interesting job at Salesforce, I would have to relocate to San Francisco.”

He chose instead to stay near family in Toronto and figure out his next move.

Surveying the venture landscape, Mr. Stein felt “there’s this gap in the Toronto market, where I don’t think there’s enough [sales and marketing] expertise coming to the aid of companies.” He considered joining another startup, but partly at the suggestion of Mr. Schulich, he decided it would be “an interesting challenge” to apply his experience growing enterprise software businesses to a broad number of firms. “We thought the ecosystem could benefit from another player with a slightly different focus than other investors in the market.”

Mr. Stein is not the only impressive name at the helm of Leaders Fund. Co-founder Stephen DeBacco held chief-level positions at both Workbrain and Rypple and served as chief revenue officer with Applied Predictive Technologies, a big-data analytics firm that sold to MasterCard for $600-million last year. Another co-founder, Gideon Hayden, is an entrepreneur and former senior associate at OMERS Ventures. Rounding out the team is venture partner Howard Gwin, one of the deans of the Canadian tech scene.

The Leaders Fund will operate out of offices in Toronto and Atlanta, where Mr. DeBacco lives, and focus on investing in subscription, cloud-based software providers catering to large companies. Unlike other venture capital funds, Leaders is an “evergreen” fund, meaning it doesn’t face the typical constraints such as defined timelines for seeking “exits” from investments or defined ownership thresholds. “We’re more flexible in terms of the investments we make,” Mr. Stein said, adding the fund could buy anywhere from 5 per cent to 20 per cent of a company.

The fund will target startups that have begun to generate a few million dollars a year in revenue and will seek to initially invest between $1-million and $5-million per company. Leaders announced its first deal last week, co-leading a $10-million investment in Whitby, Ont.-based 360incentives, a cloud-based incentives software platform.