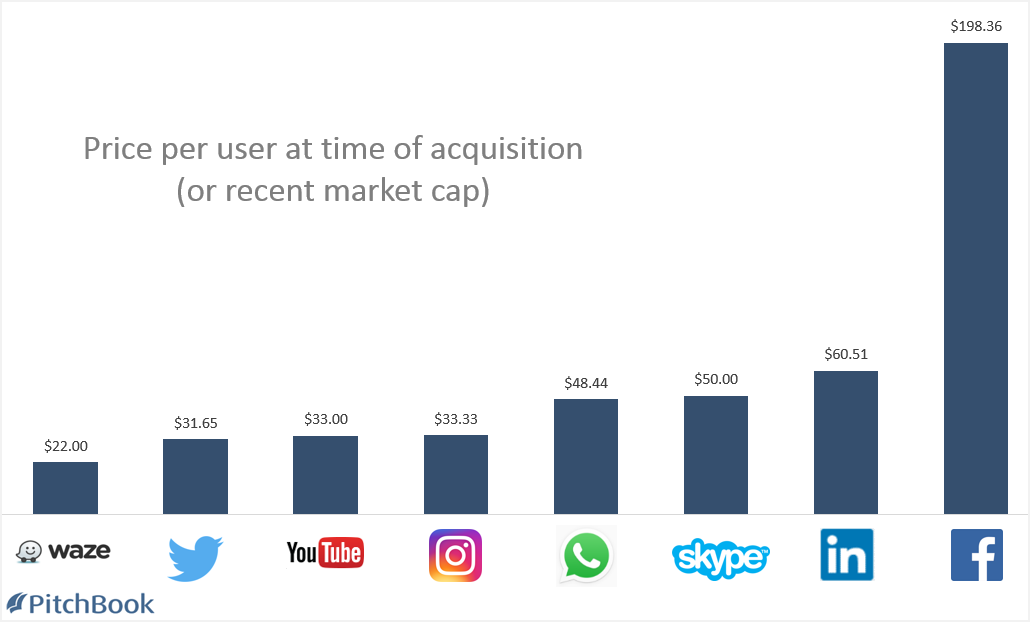 The LinkedIn Acquisition: A Monetization Story

Unless you’ve been living under a rock, you’ll know that Microsoft announced some monstrous news this week - the acquisition of LinkedIn for $26.2Bn in cash. This acquisition comes on the heels of what has been a busy month for enterprise M&A (Oracle buying OPower, Ravello, Textura, Salesforce buying Demandware, Vista buying Marketo, Thoma Bravo buying Qlik, and so on and so forth).

I’ve seen many publications analyze the deal using a straight price per user analysis, however simply looking at the deal on a price per user basis like this chart from Pitchbook shows, doesn’t tell the full story.

Some deeper analysis relating to growth, engagement, and monetization, in relation to other public company social networks helps to contextualize the deal and price paid for LinkedIn.

Although LinkedIn has a smaller absolute number of MAU’s, their quarterly growth rate over the last twelve months has been faster than both Twitter and Facebook.

Furthermore, LinkedIn’s user base in China has also been growing tremendously. The company surpassed 20 million members as of Q1 2016, and this doesn’t include the new mobile app they’ve launched named Chitu, which apparently is growing at the same rate as the global platform. As Microsoft aims to bring their enterprise products into the Chinese market, this can be a huge wedge to prospect and sell to new customers.

Monetization metrics are where LinkedIn begins to pull away from the pack.

LinkedIn is able to monetize its MAU’s at $32.8/year, and the contribution margin on those users is impressive at 86%.

Part of the reason for LinkedIn’s great performance in this domain is that it is not solely reliant on an advertising model to monetize its users. By using a combination of subscription and advertising, it has been able to monetize its users to a far greater extent than Facebook and Twitter. Furthermore, LinkedIn’s user base is made up of primarily business users, whose value is intuitively higher than a passive user whose eyeballs are being monetized.

This analysis looks at the unit economics of a user vs other major social networks, and doesn’t take into a account the potential synergistic value arising from this acquisition.

Although the price tag looks hefty, the price paid is a far cry off the peak price LinkedIn achieved a few years ago. Furthermore, looking at the value per user paid without looking at the unit economics of those users is an incomplete exercise. LinkedIn has been able to monetize its users impressively, and Microsoft undoubtedly places a premium on new ways to access business users.

The real question is what Microsoft will be able to do with its new asset. History would tell us that LinkedIn is destined to fail after being swallowed by the behemoth (Nokia at $7.2B and aQuantive at $6.3B were big failures), but the company has new leadership and a reinvigorated energy/attitude. I’m optimistic they’ll be able to make good use of it.

Thanks to Adam, our analyst at Leaders Fund for pulling data